The Coach and Facilitator 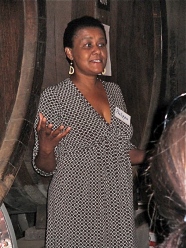 Philippa Namutebi Kabali-Kagwa is the Director of Namutebi and Associates.  Her work, as a Coach and Facilitator, has focused on the areas of leadership development, personal mastery, organisational change and organisational learning.  Her consulting career started in 1994, focusing mainly on the Education and Development sectors.  In 2003 she set up Namutebi and Associates to give her the freedom to work across sectors, focusing on helping organisations transform their ‘human resource into their life-force’.  In 2007 she joined Kessels & Smit: The Learning Company SA, as a founding partner.  It was an opportunity to work with an organisation made up of over 40 consultants, based in 6 countries.  She resigned in 2010 because of shifting priorities in her life and work, but remains connected to some of the colleagues.

Since 2003 she has worked in a wide range of contexts and roles e.g. – Consultant Facilitator with the Networked Learning Group of the National College of School Leadership in the UK; Designer and facilitator the MDM programme at Ogilvy (Cape); Facilitator on various programmes of the Corporate Learning and Executive Education departments of the Graduate School of Business, UCT – e.g. Nestle Leadership Advancement Programme (NLAP), INSETA, Metropolitan Senior Leaders Programme (MSLP), JnJ ASCEND; Facilitator of a reflective processes, using Storytelling, for the Nurses on Diabetes Conference for Roche in South Africa;  appointed by UNICEF, as part of the Storywell Team, to co-design and facilitate a programme, using Storytelling and Creative process, for caregivers of orphans and vulnerable children in Mpumalanga and the Northern Cape; Organisation development consultant for the Children’s Institute UCT, Kidzpositive and Absolute Return for Kids; and a variety of coaching roles as outlined below.

She is currently engaged as a facilitator on a Global Leadership programme for a large international NGO as part of the Kessels and Smit (Netherlands) team.

Philippa believes that when people stand strong in whom they are, they are able to add real value to their work – this belief is at the core of her practice as a coach and facilitator.  Her skill lies in creating a safe space that invites individuals (and teams) to explore their current reality, ask challenging questions and use creative processes to imagine the future that they would like to create.  Through coaching she helps the client articulate liberating assumptions and develop new practices – integrating their cognitive, physical, emotional, spiritual and creative selves – in order to achieve their goals.

Many of my coaching assignments have been as an associate of a variety of organisations: The Coaching Centre; Integral Coaching SA; Emuthini to name a few.

Philippa has presented herself as a gentle and caring person. She has an unassuming personality that made it easy for me to speak freely to her without fear of being judged. During sessions which were mostly over the phone I have felt listened to. Through probing questions from my coach I found myself coming up with answers to things that I thought were difficult. I found myself learning to listen to what I say, and looking at things from other people’s points of view.

With the guidance from Philippa the goals I had set for myself have been achieved and that has transformed my life. I have begun to live a balanced life. I therefore would recommend Philippa to anyone who needs a coach.

Philippa Kabali-Kagwa has been my coach since March 2006.  She is thoughtful, conscientious, attentive and always respects the confidentiality of our conversations.  Philippa began our coaching relationship by helping me identify a series of personal and professional goals for the year.  Two of the many goals I identified with Philippa’s help include: (1) learning to say “no” to avoid over-extending myself and (2) working to achieve balance between my personal life, career objectives, volunteer work and spiritual needs.  Throughout the year, Philippa has guided and encouraged me to meet these goals.

Most importantly, Philippa helped me develop criteria for determining when to take on or decline new responsibilities and when to withdraw from current responsibilities where I have outlived my usefulness.  In the last 6 months, I have declined a number of speaking engagements and projects and have finally withdrawn from one committee from which I needed to withdraw a long time ago.  I have also set written priorities for my personal, professional and spiritual life.  Philippa has encouraged me to articulate my personal values and in global life planning helps me recall what values and goals are most important to me.

Coaching has been a valuable experience and I recommend Philippa to anyone who is serious and committed to genuine self-reflection.