When the night is unsafe … life goes on 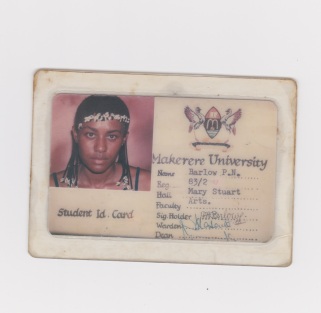 Kampala in the 1980s…
It was a time of road blocks manned by irrational scary soldiers, of ‘panda gari’ (police swoops on neighbourhoods to arrest young men who were suspected of being guerillas), and pop-corn disco (gun shots at night). And we still went to parties and clubs, to discos, people got married, we celebrated important occassions – it became more important – perhaps an affirmation that life was more than that?  Often the parties were ‘trans-nights’ – all night affairs that started before dusk and ended when the morning light licked the skies because then it was safer to travel in the day.  But we still travelled at night – knowing which roads and neighbourhoods were safe.  Life goes on in times like this.

It was 1983.  I had finished high school, and was taking a gap year because my year group in Kenya was doing national youth service. I stayed in Kampala, was an occassional student at Makerere and met Victor. He asked me to join a band, The Elements, and I did. We had a blast, performed at the Neeta(?) with the late Flo Sebalu, Mahela, Estella Muyinda, Maggi, Vikki, Liz, Tim, Steven Nsubuga, Andrew Kasirye, Allan, Semakula, the late Arthur Kasirye, one of the Serukenyas. We sang songs we loved, had costumes sponsored by Lady Charlotte and made no money!  Mr. Serukenya (a well known Engineer, singer, composer and also Victor’s Uncle) loved our performance and asked us to come and perform at a Roko party in Kololo on New Years Eve. We were excited and although we couldn’t all make it, we agreed that those who could would. Victor picked Maggi and I up at home on Sezibwa Road in Nakasero. My parents reluctantly let us go. We packed ourselves into the little Honda Accord (which we called Engo – the Leopard) – Victor, Steven, Anne, Maggi, Tim and I and left quickly before they changed their minds.

The party was on Summit View Road in Kololo – right on top of the hill. We had a rough idea where it was (no google maps those days) so we drove up Kololo Hill Drive slowly, looking out for Summit View with the windows open and ears pricked to hear the loud music. We came to a T-Junction and knew we were close.  It was either on the road to the left or on the road to the right.  We took a gamble and turned right. We passed two men walking but did not think to ask them for directions. We drove on – windows open, listening. Then suddenly a man in camouflage army fatigues dropped out of a tree and stood in front of us, cocked his gun and shouted, “Simama!” Victor stopped the car and we all jumped out, hands in the air, hearts beating and stood there.  A few more soldiers appeared.  We had taken the wrong turn, and were at the army camp that was on top of the hill!

The soldier who had stopped us stood there.  His eyes bright and blood-shot darted around, and his hand on his gun was restless.  Who were we and why were we there? He wanted to know.  We tried to explain but he did not care.  Anne was the most articulate of us.  The soldier’s body seemed to vibrate with anger – his voice sitting somewhere between talking and screaming.  We stood there waiting.  Then he said, “Wapi pilot?” (Where is the driver?) So Victor came forward, and was told to drive the car forward, beyond a boom – and into the camp!  Victor sat behind the wheel and tried to talk to the soldier but he said, “Shut up!” and moved to hit Victor with the butt of the gun.  Luckily Victor inched the car forward slightly, and the gun hit the door.  Anne tried to negotiate but he kicked her and told her to be quiet.  Victor drove in and we followed on foot.  They made us squat in front of the car, headlights shinning on us and asked for our IDs.  They asked us where we lived.  Victor, Anne, Tim and Steven all lived in Makindye, and Maggi and I lived in Nakasero.  This baffled them.  They wanted to know why we were together if we lived in different parts of town.   ‘ Who is your boyfriend?’  they asked Maggi, Anne and I, with snide laughter.  We were all starting to feel very uncomfortable.  Suddenly the two men we had passed came into the camp and joined us.  They were in civilian clothing.  They asked what was going on and the first soldier saluted and  explained that he wanted to punish us – we were not supposed to be there.  The two men said it was okay, they would handle the case.  The red-eyed soldier was not happy.  Some where in their interaction we realised that the plain clothes men were Lieutenants. They told the red-eyed soldier that they would have to take us to the army barracks in Makindye for our punishment.  He said okay.  We looked at each other – Makindye barracks?!  Everyone knew that most people who went to the Makindye barracks did not come out.

One of the Lieutenants got into the car with Victor, and asked him to drive deeper into the camp.  I asked, “Where are you taking him?”  And the other Lieutenant laughed and said that they were just turning  the car around.   They came back and we got in – there were now 8 of us in the tiny Accord!  “Tunaenda Makindye,” one of the Luietenants said to Red Eyes, and out of the boom we drove.  The air in the car was charged  – you could smell it.

We drove down Kololo Hill Road, and at the bottom, the men told us to stop.  They got out and told us to go, and to never come back up there. We said, “Thank you.”  And drove away.  And then someone said, “Where are we going now?”  We had left home about an hour earlier.  If we went back, what would we say? We couldn’t tell them what had happened because they would ground us for life – Kampala was not safe at night.  We finally went to the Kicementi – a shopping block whose shops turned into bars at night.  It was relatively safe, and we needed a drink.  After a few drinks, and a debrief we decided that t it was our new years eve and we were going to celebrate after all we almost did not make it.  We got into the car and drove to our favourite disco – Chez Jozef – and danced the night away.

Our parents only learnt about this years later.

Posted in Uncategorized and tagged Kampala. Bookmark the permalink.

I am a facilitator, coach and storyteller/storyfacilitator, and use story, song, art and dialogue to facilitate change and development in individuals and organisations. Over the years I have become aware of how I have used stories to make sense of my life - and of the ways in which we all use story, consciously and unconsciously. Stories - myths, folktales and personal stories - are used to teach, to bind, to questions, to hold ambiguities, to explore, to hold up a different picture, to bring together and also to hold back, to suppress, divide and destroy. With this understanding I have built story into my work. I use it to make conscious the stories people and organisations tell themselves that either support or hinder their growth. I use them as an opening, an invitation to begin to speak about the difficult things - to name 'the elephant' in the room. I use them as an invitation to people to dream of possibilities - and I also teach people to tell and to listen to stories because without a listener there is no story. I was born in Uganda and lived there until I was in my early teens. Since then have lived in various parts of East and Southern Africa - and have been involved in development work in Namibia, South Africa, Uganda and the UK. I have also coached clients in South Africa, Namibia, the UK, Belgium, Israel and USA.
View all posts by Philippa Namutebi Kabali-Kagwa »
← Easter in Addis Ababa, April 2014
Where were you 21 years ago? →